The Real World Hum at Fireforged.ca www.therealworldhum.com www.therealworldhum.ca
Regional variations in the prevalence rates of multiple sclerosis in the province of Alberta, Canada - "The prevalence rate for Alberta is among the highest reported in the world indicating that the province appears to be an excess risk area relative to other global locations."
https://pubmed.ncbi.nlm.nih.gov/8190211/

Are you being awakened or kept awake at night between midnight and 4 am? Do you hear a noise that sounds like a Hum or a diesel engine off in the distance?
Is this "diesel engine" sound louder at night or in certain rooms ?
Do you have unexplained chest pain, tinnitus, vertigo, headaches and illnesses ? Are you inexplicably sensitive to certain foods and medications ?
Are you suffering from anxiety and unexplained health problems ?

For decades this unexplained low frequency noise has been referred to as The Hum. It has been wrongly identified as some type of natural phenomenon when in fact it is Industrial noise pollution.

It has had an adverse effect on many people and even reportedly driven some to commit suicide. The perpetrators hide behind the obscurity of speculation by the media and continue to do harm to this very day.

At the moment low frequency noise and infrasound generated by industrial noise polluters are blanketing many parts of the world. Government and Industry are choosing to ignore the problem. 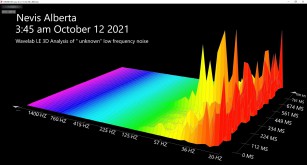 Instead of acknowledging the problem of low frequency noise, the Alberta Government is choosing to pretend it isn't happening.

This is the most recent 3D analysis of a simple wave file recorded at 3:45 am in the Nevis Alberta area. It is an analysis of a raw .wav File recorded witha Zoom H4n Pro digital recorder The image is a feature included in Wavelab LE Software called 3D Analysis.
As you can see it clearly indicates the presence of a low frequency noise between 20 - 57 HZ.

Alberta Canada is blanketed with pipelines and pipeline compressors. These pipelines and compressors are part of a vast network that begins in northern Alberta and British Columbia and extends to eastern Canada and the Atlantic coast of the United States. Additionally there are local transmission and distribution systems that are prolific and it is almost impossible for the average person to understand the magnitude of these systems. There are tens of thousands of miles of buried natural gas pipeline in North America. In fact there are few other industries with a presence as large as the natural gas industry on planet earth right now and it is growing exponentialy.

The majority of ILFN in Canada and the United States is generated by Natural Gas Compressors and as a result, large portions of North America are being subjected to ILFN. Residents of almost every State and Province are being unknowingly subjected to Infrasound and low frequency noise.

To date The Alberta Government supports a system of reporting ILFN that results in absolutely no record of incidents or complaints against  industry or industrial noise polluters. ILFN complaints are directed to AER who denies the existance of ILFN in Alberta and refuses to objectively investigate these complaints.

In the United States, FERC oversees the transportation of natural gas. FERC's reputation for handling noise complaints against gas piplines and compression facilities is abysmal and often results in little if any action being taken.

NATURAL Gas infrastructure is seen by the people who regulate, operate and profit from their existance, as having a such level of importance that they are beyond reproach in terms of regulation. The same people have a “Show must go on attitude” and as they see things,anyone perceived to be impeding the process deserves to be ignored.

Anyone who is adversely affected is written off by both the Corporate entities responsible and Government Authorities and Regulators as a cost of doing business. Hum sufferers are not recognized by Government or Medical Professionals and there is currently no treatment or even acknowledgement of what is happening. To Date no  known Regulator or Government is capable or willing to measure or monitor low frequeny noise. Despite the incredible degree of suffering , those affected are shunned and ignored by ALL levels of Government, Regulators, Health Care Professionals and society at large.

To summarize, the support given to people who are affected by the Hum is worse than the treatment given to animals. Although most of the people affected describe the experience as torture, we are ignored , marginalized and treated as being defective and not worth helping.

As of August 15 2022 this condition still exists in Alberta and many other parts of the World. The Alberta Government has been made aware of this situation and chooses to do nothing. The Industry continues to cower behind Legislation designed specifically to make it impossible for complaints to surface and be heard. Mainstream Media are also afraid to tell the truth about how "Big Oil" and Fossil Fuel producers are doing harm to most often unknowing members (victims) of the general popultion.

If you have doubts about what harm long term exposure to low frequency noise can do to Humans please do your own research. The is a growing body of evidence that leaves absolutely no doubt about the effects of  low frequency noise on the human body. These affects a re NOT limited to the small percentage of people who can actually sense and hear low frequency noise. Very recent research on Wind Turbines shows that anyone who is subjected to low frequency sounds waves may suffer very serious health issues.

Until Governments and the Fossil Fuel Industry acknowledges this situation as fact and begin to take steps the mitigate low frequency noise pollution YOU ARE AT RISK ! Why should you or your children suffer negative health consequences and disease so that your Government and Natural Gas Producers can earn even more profits ?

for more info on the Hum visit
www.therealworldhum.com